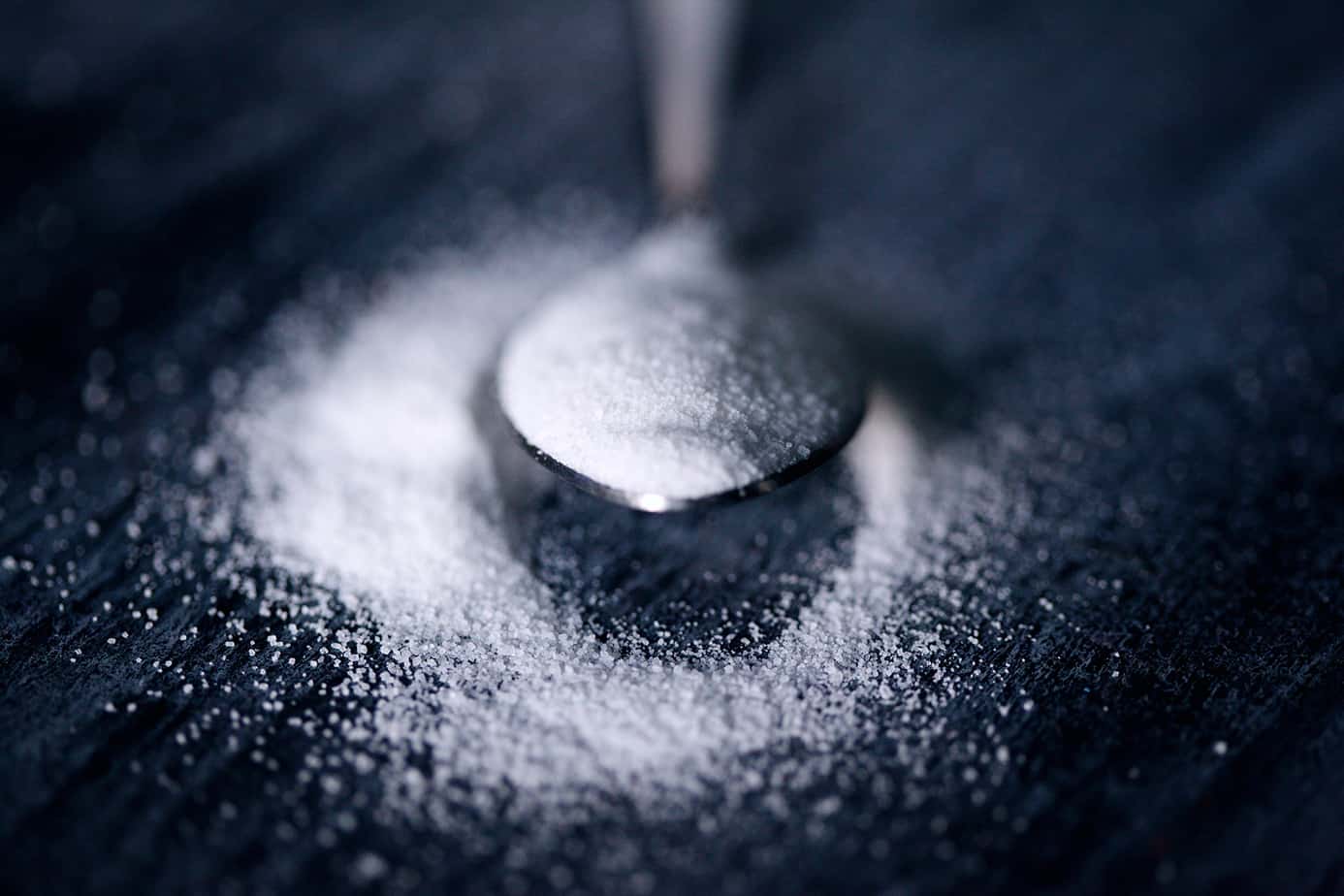 If you’ve ever tried to limit how much sugar you eat, you may have noticed how sugar seems to be in nearly everything. From peanut butter to salad dressing to marinara sauce, it can be found in the most unexpected products! Even foods that we all think of as healthy, such as juice, smoothies, and yogurt, can be extremely high in sugar. Refined sugar is especially prevalent in quick, processed foods that are tasty and convenient.

What may surprise you is that in the United States the average person consumes more than ½ a cup of added (hidden) sugar every day—that’s 4 times the recommended maximum intake! And if that sounds like a lot, it gets worse: sugar consumption by Americans is only on the rise.

You probably already know how addicting sugar can be…another cookie or scoop of ice cream, anyone? But along with that, you should also be aware of the many potential negative effects sugar can have on your body.

Sugar can lead to weight gain, dental cavities, increased risk of heart disease, acne, low energy, and type 2 diabetes. These problems are commonly talked about, but have you heard that sugar may also accelerate cognitive decline and increase your risk of Alzheimer’s disease?

The Connection Between Type 2 Diabetes and Alzheimer’s Disease:

There has been much concern over how having a diet high in sugar can lead to the development of type 2 diabetes (T2D). The number of people diagnosed with T2D has increased dramatically over the last few decades due to the growing prevalence of a sugary, Western-style diet and lack of exercise.

What may be even more concerning, however, is that studies show that patients with type 2 diabetes have a significantly higher rate of developing Alzheimer’s disease. In fact, old age and T2D are considered the main risk factors for Alzheimer’s. Though separate diseases, it appears that factors such as impaired insulin signaling, chronic hyperglycemia, and an inflammatory response to sugar lead to the development of both Alzheimer’s and diabetes. Similarities such as these support the hypothesis that Alzheimer’s disease is a form of brain diabetes, termed “type-3-diabetes.”

In some cases, the path from sugar to Alzheimer’s starts off with the diagnosis of type 2 diabetes; however, that’s not always the case. A longitudinal study followed up with 5,189 participants after 10 years and determined that people with high blood sugar had a quicker rate of cognitive decline compared to those with normal blood sugar, whether or not those with high blood sugar were considered diabetic. So although type 2 diabetes is a major risk factor for developing Alzheimer’s disease (A1C of 6.5 and above), those who are prediabetic (A1C of 5.7-6.4) also have a greatly increased risk.

Being aware of and limiting your sugar intake now may help you decrease the risk of cognitive decline and Alzheimer’s disease in your future.

Blood Sugar and Your Brain

Let’s look at three ways in which high blood sugar harms the brain:

Inflammation on the inside of your body looks similar to that on the outside—red and swollen—and it has a negative effect on your tissues and organs, and the brain is no exception. In fact, inflammation is one of the characteristic features of Alzheimer’s disease. As part of the body’s inflammatory response, signaling molecules called cytokines are released into the blood by immune cells. Cytokines activate enzymes leading to an impairment of insulin signaling and potentially even neuron death.

Neurons are key players in your brain. If your favorite basketball team started losing a bunch of key players, pretty soon your team wouldn’t be winning any games! Losing neurons in your brain is even more critical than losing a game or a season though because unless you do something to get those key players back, the loss will be permanent and lead to cognitive decline.

High-sugar diets promote insulin resistance, an early and common hallmark of Alzheimer’s disease. Insulin is a critical hormone made by the pancreas that lowers blood sugar by signaling your cells to absorb glucose (sugar) from the blood and use it for energy. When you consume a lot of carbohydrates, your blood glucose levels rise. When this happens, your pancreas makes more insulin in an effort to decrease blood glucose levels. But just like other hormones in the body, if your body is constantly having to elevate insulin levels, your cells will eventually become resistant to the effects of insulin. Insulin resistance occurs when the cells in your fat, muscle, and liver no longer respond well to insulin and so blood sugar levels build up. If levels of fasting glucose or blood sugar are higher than normal, doctors refer to this as prediabetes, or one could also say “pre-Alzheimer’s.”

3. Sugar alters both the oral microbiome and the gut microbiome, both of which are linked to Alzheimer’s Disease

The link between sugar and diseases such as diabetes and Alzheimer’s is postulated to be at least partially due to a change in the microbiome. Each of us has a “garden” of microorganisms living on and within us, including in our mouth and digestive tracts. Our microbiome is essential for good health and functioning and contains good bacteria which helps to digest food and boost the immune system. Consuming an increased amount of sugar or artificial sweeteners changes these sensitive environments in the gut and the mouth, causing an adaptation and change of microbiome composition. There are links between bacteria composition and conditions such as insulin resistance, obesity, and diabetes. Experimental and clinical data confirm that through a series of events, alterations in the gut microbiota composition can impair the blood-brain barrier and lead to neuroinflammation and neurodegeneration, contributing to the pathogenesis of Alzheimer’s disease.

With all this talk about the negative effects of sugar, you may be thinking, “Okay, I should probably decrease the amount of sugar I am consuming, but how do I give up all of my favorite foods that satisfy my sweet tooth?”.

Fortunately, there are still many ways to sweeten your food without adding refined sugar.

While most products that carry a “sugar-free” or “low-sugar” label are using artificial sweeteners that have their own set of problems, there are also natural sweeteners which are safe and better for most people. If you struggle with high blood sugar please note that even healthier options like the ones listed below can cause blood sugar spikes. 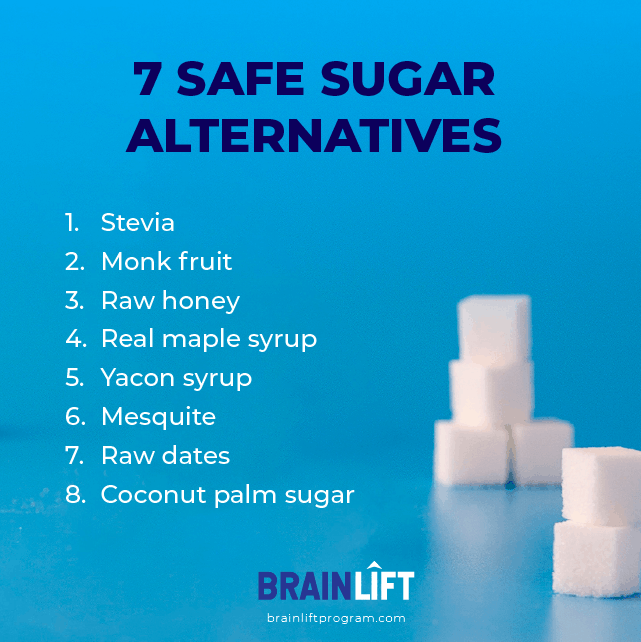 How to Beat Sugar Cravings

We know how difficult it can be to cut back on sugar, so here are some tips you can try to help you reduce your sugar cravings:

Natalie Smith has a passion for living, learning, and helping others implement a more healthy lifestyle. She is a healthy foodie, runner, and peanut butter connoisseur. Her experience working in nursing homes and physical therapy clinics has fueled her interest in studying how lifestyle changes can impact one’s health and ability to decrease the risk of chronic illness.

© 2023 Brainlift. All Rights Reserved, Your Own Healthy, LLC.