By Natalie SmithMarch 17, 2021No Comments

You have probably heard about coconut oil and its multiple health benefits. Whether in your hair, food pantry, or medicine cabinet, it’s a go-to product and ingredient used by many. Talk of coconut oil seems to come up everywhere, from your feed on social media to the items in your grocery store. Coconut oil is believed to have properties that help moisturize the skin, protect hair from damage, clean bacteria from the mouth (through a popular technique called oil pulling), aid in digestion and weight loss, disease prevention, and more. [1,2]

Some small-scale studies are even showing that coconut oil may directly contribute to improved brain function.

So what is it about coconut oil that correlates to brain health?

Coconut oil is made by pressing the fat from white coconut “meat” found inside the giant fruit. The resulting oil is primarily (90%) made up of saturated fats, which is why it is solid at room temperature. Though saturated fats have gotten a bad rap in the past, coconut oil has a special kind of saturated fat—different from that found in dairy and conventional meats—that is believed to play a productive role in body processes and a protective role in the brain. [3]

Unlike most fats and oils which contain LCTs (long-chain triglycerides), coconut oil contains MCTs (medium-chain triglycerides), which are just shorter fatty acid chains. When you digest MCTs, they tend to go straight to your liver where they are quickly metabolized and converted into energy molecules known as ketones. [4] This additional source of energy can improve the brain’s ability to function correctly. Authors of a study including older adults with Alzheimer’s disease or other memory disorders reported that the consumption of MCTs improved brain function and cognitive performance. [5]

Why is the body’s development of ketones an important process for those with Alzheimer’s disease?

In a high carb diet—like the Standard American Diet—glucose molecules from carbohydrates are the primary source of fuel for our body. However, it has been discovered that individuals with Alzheimer’s disease have an impairment of glucose metabolism and uptake into their brain—similar to the problem diabetics have in which their bodies lose the ability to utilize insulin to get glucose into their cells. This connection between Alzheimer’s disease and diabetes has led some medical professionals to refer to Alzheimer’s as “Type III diabetes.” [6] This condition is believed to start decades before cognitive impairment is evident, and especially for those with the ApoE ε4 gene which increases a person’s risk of getting Alzheimer’s.

Thankfully, your body has a backup plan. Just like having a backup generator for your house, when your body runs out of its primary fuel source (glucose) it converts fats into molecules called ketones. These ketones are made by your liver as an alternate energy source when you don’t have enough glucose in your body. This is why the ketone-boosting properties of coconut oil are believed by some to be a possible solution to cognitive decline.

Bonus: the fiber in coconut meat can improve digestion, which is also helpful in controlling blood sugar levels. [8]

In addition to providing fuel for the brain, a cell study showed that coconut oil may also help to protect brain neurons from the destructive effects of amyloid beta-peptide—the main component of brain plaques found in Alzheimer’s patients which disrupt brain cell functioning. [9]

A study supporting this idea conducted in 2018 found that a coconut oil enriched Mediterranean diet appeared to improve cognitive functions in patients with Alzheimer’s, depending on sex of the patient and severity of the disease. [10]

Coconut oil also contains antioxidants–those magical compounds that protect the cells that make up your body and brain. [11,12]

How to Use Coconut Oil

Wondering how to start incorporating coconut oil into your diet? 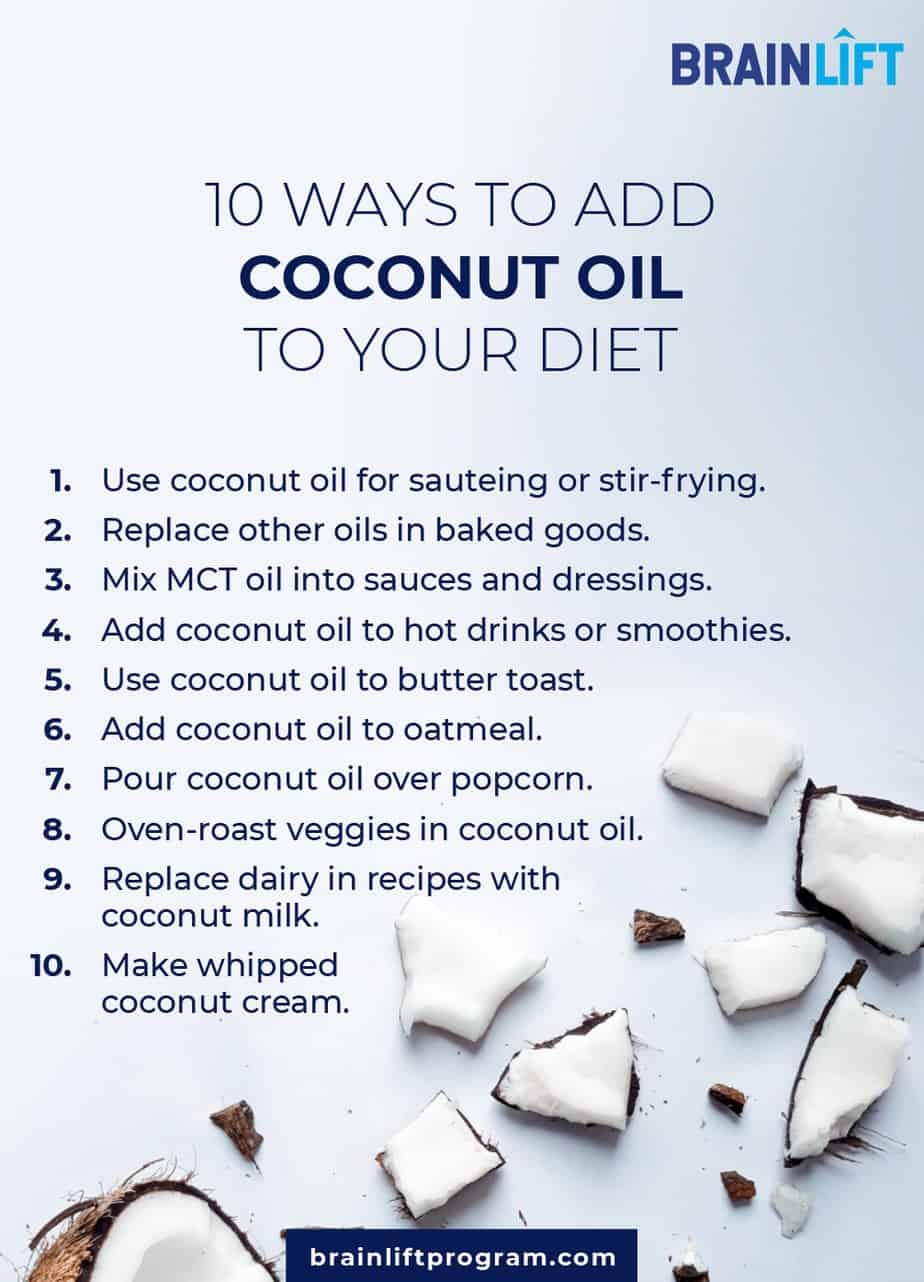 When at the grocery store, look for coconut oil products labeled as “extra virgin,” “unrefined,” and/or “cold-pressed” which include less extensive processing compared to conventional products which lack a coconut aroma or taste. Whether you are new to the idea of coconut oil or looking for more ideas to better incorporate it into your diet, here are a few ideas to get you thinking:

We feel that there is enough emerging research out there to support adding coconut oil into your diet for the brain-protective benefits. [13] While these studies have shown positive outcomes with increasing coconut oil in the diet of Alzheimer’s disease patients, we need additional research and larger-scale studies to prove benefits. Unless directed otherwise by your doctor, coconut oil appears to be a healthy choice that may be worth trying.

Natalie Smith has a passion for living, learning, and helping others implement a more healthy lifestyle. She is a healthy foodie, runner, and peanut butter connoisseur. Her experience working in nursing homes and physical therapy clinics has fueled her interest in studying how lifestyle changes can impact one’s health and ability to decrease the risk of chronic illness.

© 2022 Brainlift. All Rights Reserved, Your Own Healthy, LLC.